How to Be a Frank Sinatra Impersonator in 7 Easy Steps 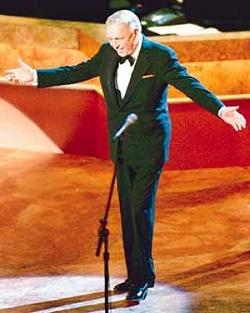 In my constant research to improve myself as a performer I came across an article on a popular how-to website on How to Be a Frank Sinatra Impersonator and since it can be done in seven short, easy steps, I thought, as the world’s best Frank Sinatra impersonator, I’d let you all know just how little effort it takes.

Step 1 – “Buy a nice, dark suit.” As the first step, this is clearly the most important. Look at this photo of Frank and I and you’ll see that we’re both in black tuxes, so I can’t argue with this step.

Step 2 – “Do some research.” Spot on. The author on eHow even provided their readers with some valuable information: “Frank Sinatra was a member of the Rat Pack, and the members included Dean Martin, Sammy Davis, Peter Lawford, Humphrey Bogart, Lauren Bacall and Shirley MacLaine. After leaving his first wife Nancy, he was married to Ava Gardner, Mia Farrow and Barbra Marx.” The misspelling of Barbara’s name aside, knowing anything more than this is just overkill.

Step 3 – “Familiarize yourself with Sinatra's songbook collection.” I learned early on that it’s always good to sing “The Voice’s” songs when impersonating him, so this is completely accurate.

Step 4 – “When you sing, stand straight, but nonchalant, with your shoulders slightly hunched. Lean slightly forward on certain key phrases. Maintain eye contact with the audience. Make with the lighthearted patter between songs. You might drop some signature Sinatra phrases like "Ring-a-ding-ding" and "It's a gasser."” Wow-ee wow wow, any Charley who follows this advice is definitely a big-leaguer! (See what I did there?)

Step 5 – “Practice, Practice, Practice.” Definitely! Now that you’ve spent all that dough on a new suit, learned the names of his pals, wives and a few songs, and have memorized how his act became so successful in five short lines, you’ll want to run through it all a few times so you don’t forget it all.

Step 6 – “Create a name for your act.” We’re getting down to the nitty gritty now. Maybe you can share the name you come up with – seriously, put it in the comment box!

Step 7 – “List your act on a website such as Gig Salad or Gig Masters to start booking gigs for yourself.” And just watch the money roll in as you head to superstardom!

There, now everyone knows just how easy it is to do my job – of course, I love doing this so much it doesn’t even feel like a job. I can’t think of anything more for you to learn, except perhaps a sardonic wit.

In complete seriousness, I’m glad there are people interested in what I do as it validates how current Frank still is and how important a figure he was in entertainment history and I do look forward to watching and listening to a whole new generation of Sinatra aficionados.