How Sinatra Began His Performance Career 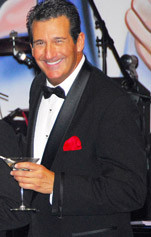 Rick Michel pays tribute to one of the most legendary performers of all time, Frank Sinatra. Known as “The Voice”, “The Sultan of Swoon”, “Ol' Blue Eyes” and “The Chairman of the Board, Sinatra grew up in Hoboken, New Jersey, looking up to performers like Bing Crosby.

Sinatra's first major gig came in 1935, as he performed with a New Jersey group known as The 3 Flashes, later renamed as The Hoboken Four. The group challenged other performers on the Major Bowes Amateur Hour, a popular talent contest broadcast on the radio. Sinatra and his music group were asked back onto the show, raising their visibility in the public eye. Sinatra's original application for the Amateur Hour competition can be found archived online by the Library of Congress. This pivotal moment led the group onto a six-month musical tour with Edward Bowes, across the United States.

Radio broadcasts continued to bring Sinatra's voice to thousands of listeners worldwide. He became a waiter and performer at a venue known as the Rustic Cabin. These performances were played by WNEW radio, exposing more listeners to Sinatra's characteristic croon. Soon other prolific musicians, like Harry James and Tommy Dorsey were asking to collaborate with the singer.

The 1940s were incredibly prolific for Sinatra. His partnership with the Tommy Dorsey Orchestra allowed him to top the charts with hits like "I'll Never Smile Again" and "Fools Rush In." Eventually, Sinatra cut ties with Dorsey over contract agreements, and struck out on a solo career with Columbia Records.

Rick Michel distills Sinatra's command and passion for state performance in his many interpretations of this artist and his songs. With shows like "Sinatra Forever" and "Drinkin’ Singin’ Swingin' Salute to Frank Sinatra – Sammy Davis Jr. – Dean Martin", Rick is brings rich character and multifaceted personalities to life on the stage. Rick Michel also strives to inspire new generations of performers with his book, Live on Stage. Just like Sinatra, Rick knows how important it is to have idols to motivate one's career. Through a life dedicated to entertainment and performance, Rick continues to delight audiences around the world.