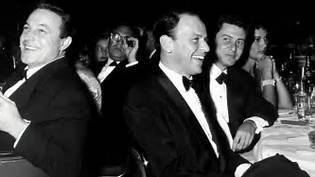 This past Sunday was the 75th Golden Globe Awards.  Sxty years ago it was 1958 and the Rat Pack was there in full style with wit and humor and rarely an empty glass. Frank Sinatra was nominated that year for Pal Joey as Best Male Lead in a comedy or musical and he was a winner, but I want to look at who else was in attendance and who won in a few of the other categories.

Marlon Brando was nominated that year for best actor in a drama for his performance in Sayonara and I’m sure that Frank and the boys had a toast to the win for Alec Guinness in that category, and for Brando’s loss, or as Frank would call him, Mr. Mumbles!

It’s interesting that I posted on Facebook asking people if they would rather be at today’s Golden Globes or back in 1958 when the Rat Pack was there. An overwhelming amount of people who follow me wanted to be at the Pack’s Golden Globes, which doesn’t surprise me too much because it would’ve been a crazy-cool party.

That year Frank’s acting and dance partner from 1949’s On the Town, Gene Kelly, received a special Golden Globe for Promoting International Understanding.

If you think 1958 doesn’t sound all that long ago, think about who won the award for New Star of the Year: for an actress it was Sandra Dee and for actors it was James Garner!

Frank Sinatra would receive a total of four Golden Globe Awards over the years, including the Cecil B. DeMille achievement award he received in 1971.

There’s no doubt a lot changes in 60 years, but does it change for the better?  That’s the million dollar question.