From Big Band to Big Screen 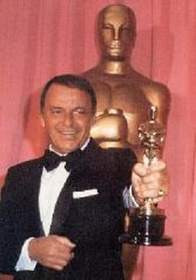 Artists are rarely only interested in one form of the arts, often dabbling in another artistic genre out of a genuine love for that particular art form. David Bowie, Johnny Depp, Jim Carrey, and Joni Mitchell are accomplished painters. Jon Bon Jovi, Christina Aguilera, Eminem, Will Smith, Justin Timberlake, and even Justin Bieber are also actors. I am too. I also sculpt. Many disciplines are intertwined, hence the term triple threat – someone proficient at singing, dancing, and acting. Can anyone say Fred Astaire?

Art is art, so it’s difficult for anyone to keep a myopic interest in one form, but it’s a rare bird that can excel at more than one and it amazes me that there are three big-name big band singers who were also able to become recognized actors, all having been nominated for an Academy Award and two taking the prize home. Frank Sinatra, Bing Crosby, and Doris Day all were top vocalists and all became sought after actors.

Doris Day had her first hit with Sentimental Journey in 1945 and would follow that up with enough hits to spend 460 weeks in the top 40 charts, more than enough to earn her the Grammy Lifetime Achievement Award. Her journey would continue into film, where she became one of Hollywood’s biggest stars, appearing in 39 films including an Academy Award nomination and the Cecil B. DeMille Award for lifetime achievement in motion pictures. Staggering considering she retired from film and withdrew from the public eye in the late ‘60s to pursue life as an animal activist.

Bing Crosby, with the technological advantage of having a microphone, introduced the world to a new form of singing – crooning. Crosby charted 383 singles, with 41 of them reaching number one, earned 23 gold and platinum records, and has been inducted into the Grammy Hall of Fame as a singer. As an actor, he had the third highest ticket sales of all time and was nominated for three Academy Awards, winning Best Actor in a Leading Role for Going My Way.

While Crosby was the first crooner, Frank Sinatra perfected the style. As others were busy trying to become the next Bing Crosby, Frank was reinventing the genre. He reinvented himself into selling more than 150 million records, winning eleven Grammy Awards, including the Grammy Legend Award and the Grammy Lifetime Achievement Awards. His acting career was equally matched, garnering critical acclaim and three Academy Awards in the process.

I’m thinking maybe I should make the jump to the big screen, I’m certain there’s an award winning role out there that suits my abilities – perhaps along side George Clooney or Jodie Foster. Or maybe I should approach sculpting with a renewed vigor and add myself, or Frank, to Rushmore.