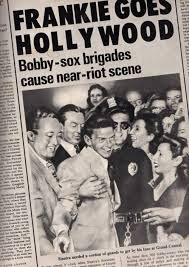 Imagine you’re in a band and looking for a name, then you see a page in The New Yorker magazine with the words, “Frankie Goes to Hollywood,” and, boom, there it is!  That’s essentially what happened for the Liverpool, England pop group that rose to fame with that name in 1980.  It turned out to be a brilliant move, with the name lending itself to all sorts of marketing possibilities.

That headline of sorts was actually a pop art poster by artist Guy Peellaert and the group with the funky, new name want on to have mega hits such as their 1983 debut single, Relax, followed by Two Tribes, then The Power of Love.  And then there was their cover of the song, War - you know, the one that goes, “War, what is it good for?”

“Frankie say Relax” turned out to be one of the most iconic sayings of the ‘80s with t-shirts, sweat shirts, and buttons seen on every wanna-be-cool teenager of that era.  Oddly enough, that saying gave rise to one of the most memorable scenes from the ‘90s hit show, Friends, when Ross asked Rachel to return his shirt.

The band’s music featured a combination of upbeat, fast dance music and smart, in-your-face controversial-for-the-time lyrics.  The songs grabbed your attention, as did much of the music of that era, but they were able to hold that attention past a single play on the radio.

The band doesn’t appear to be active any longer, but hey, not everyone can last as long as the original Frankie.

And to think, this all started because of some press coverage of Frank Sinatra heading to Hollywood to star in the movies.  I doubt any other single person has influenced popular culture as much as Ol’ Blue Eyes.