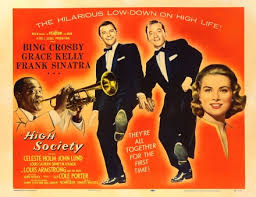 One of the first tunes that comes to mind is from the 1956 movie, High Society.  Ol’ Blue Eyes performs with Bing Crosby, his childhood idol, for the first time as they collaborate on a duet called, “Well, Did You Evah!”  The pair feed off of each other comfortably to perfectly convey the message of the song.  It immediately reminded me of an appearance Crosby made on The Frank Sinatra Show the next year where they were joined by Dean Martin for a wonderfully comedic rendition of, “Together.”

With the seriousness of Sinatra’s voice, there are a number of sillier songs that seem to be overlooked.  “There’s a Flaw in My Flue,” a duet with his daughter Nancy called, “Life’s a Trippy Thing,” and even “Old MacDonald Had a Farm” are all pretty spectacular performances.  And we can’t forget about “The Coffee Song.”

“French Foreign Legion” is a quirky ditty with some funny undertones and “The One I Love Belongs to Somebody Else” is similar in that it combines the familiar “melancholy love” theme with a sharp wit.

The fact is, for anyone familiar with Sinatra’s music, he truly enjoyed singing and had fun doing it.  You could see it in his face and hear it in his voice and when he was most relaxed and feeling safe, you’d witness a brilliant sense of humor.

I am definitely recognizing the on stage magic that happens when talented people bond and start to feed off each other’s electricity in Sammy’s Showroom, so do stop in and see Joanne O’Brien, Hazel Payne and Mr. Sheldon Craig at Harrah’s Reno - I think you’ll be glad you did.