Frank and Dean Together Again, April 27th at the Columbia Country Club 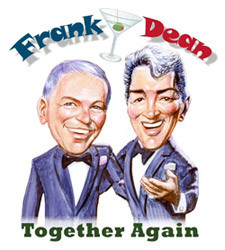 Frank and Dean Together Again, April 27th at the Columbia Country Club

The King of Swing and the King of Cool join forces to bring you Frank and Dean Together Again, a delightful evening full of laughs and nostalgic songs. Watch the compelling interactions between these two personalities on stage, as Rick Michel and Dave Halston bring Dean Martin and Frank Sinatra to life in front of audiences.

Frank and Dean Together Again will be hosted at the Columbia Country Club in Missouri. The sprawling and lush 120-acre property gives audiences the opportunity to unwind with a cocktail and enjoy the quaint backdrop.

Dave Halston is a long-time Frank Sinatra tribute artist, allowing Ol' Blue Eyes to shine through in every performance. His one-man show, big band excitement, and wedding concerts bring the joy of Sinatra to both private events and sold-out concert halls.

Rick Michel appears on stage as Dean Martin, inspiring audiences with his charismatic charm and wit. He embodies the performer with style, showcasing Dean's impressive entertainment career with ease and finesse. These Rat Pack heroes will appear on stage in their typical fashion, dressed in sharply cut suits, fedoras, and bowties. They hearken back to a time when entertainment was characterized by suave showmanship and masterful vocal talent.

With over twenty-five years in show business, Dave Halston and Rick Michel will take the Columbia Country Club by storm, captivating audiences with classic songs and comedy routines. Don't miss a chance to be part of this fun and enchanting event! Get a seat early, because the performance will surely sell out.

History buffs, swing fans, and those who adore Frank Sinatra and Dean Martin, this show is for you! Take your friends, family, or significant other out for this uplifting and rollicking event. Keep an eye out on the Rick Michel website, Twitter, or Facebook for more details on the show!