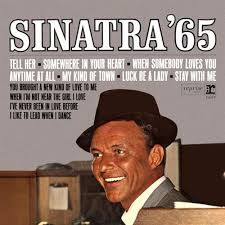 Frank Sinatra’s 100th birthday year will be officially over when December 12th rolls around and what a year it was.  It seemed the whole world celebrated at some point and I had a lot of fun participating.  Ol’ Blue Eyes had another big year though, one that was very important for him not only as a milestone, but for his career - and he made the very most of when he turned fifty.

That year, CBS’s 48 Hours spent six months following him around to get inside his head and find out a little bit about his life.  When asked, Sinatra told them a line he learned from his good friend, Humphrey Bogart, “The only thing you owe the public is a good performance.”  Well, we got that and a whole lot more.

That year, 1965, The Voice released three new albums, plus a compilation album, with two of them reaching the top ten; starred in three movies, directing and producing one; and was the subject of the CBS one-hour television special, Frank Sinatra: A Man and His Music which won an Emmy and a Peabody award.  That’s not counting performances, charity work, or anything else.  It was a Very Good Year and yes, that song was released too, winning a Grammy for Best Vocal Performance, Male.

In fact, 1965 was such a tremendous year Billboard magazine declared Sinatra may have reached the “peak of his eminence.”  He even played with Quincy Jones at the Newport Jazz Festival setting new attendance records.

In Frank Sinatra: A Man and His Music, he’s quoted as saying, “I would like to be remembered as a man who had a wonderful time living his life,” well, I think he more than surpassed his goal and his 100th year showed that he has provided wonderful memories to an awful lot of people in their lives too.