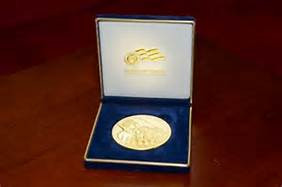 The Congressional Gold Medal and the Presidential Medal of Freedom, which Ol’ Blue Eyes received in 1985 from Ronald Reagan, are considered the highest civilian awards in our country. The gold medal is awarded to those, “who have performed an achievement that has an impact on American history and culture that is likely to be recognized as a major achievement in the recipient's field long after the achievement.” If his qualifications weren’t apparent to everyone before, they certainly are after this yearlong celebration for his 100th birthday.

There are a number of interesting facts surrounding Sinatra’s medal. In modern times, the US Mint has struck a replica of the gold medal in bronze for the general public, but no bronze was issued for Frank’s. Some speculated that the Sinatra family was blocking this from happening, but the Mint stated that, although there were some legal issues that had to be resolved, the family was not blocking production. Still, the fact remains that although dies were prepared to strike the replicas, none were ever issued and no explanation was ever given.

Another succulent bit of trivia is that no photos were ever taken of the Sinatra Congressional Gold Medal, so we only have sketches of the proposed design the Mint released before any changes were made.

We know the medal’s obverse, showing a hat-sporting Frank in his 40s, was designed and sculpted by John Mercanti and the reverse, with an older and younger singing depiction of The Voice standing in front of a globe, was by Thomas D. Rogers, Sr.