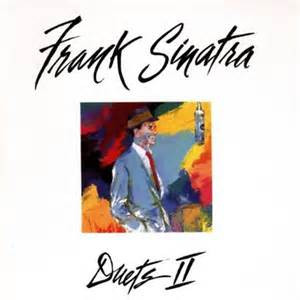 The fact that he created and nurtured a bad-boy image that would actually work to his credit as the leader of the famed Rat Pack, garnering press coverage that would keep he and the rest of the gang current, something so many media experts are just now realizing the importance of, illustrates how insightful he was in regards to his career as an entertainer. Look at how many stars try to recreate this today, often falling short of success – are you listening, Justin Bieber?

Here’s another aspect of his ingenuity that I’ve always marvelled at: the album Duets was truly pioneering in both technical and conceptual approaches. The album was released in November of 1993 and in a January 1st, 1994 New York Times review, Hans Fantel wrote, “"Duets" may prove to be Mr. Sinatra's most successful effort. Yet the new disk is stirring controversy about the aims and methods of musical recording.”

Mr. Fantel is referring to the fact that none of the songs were recorded with both artists in the room at the same time – the guest artist would sing along with the recording of Sinatra’s voice. The technique, made famous with the Barbra Streisand/Neil Diamond spliced rendition of “You Don’t Bring Me Flowers,” is very common today, but seemed impersonal at the time the album was introduced. Natalie Cole used the technology in 1991 to acclaim with her album “Unforgettable… With Love,” but people weren’t quick to warm up to the idea of two living artists recording in such a manner.

For the 1996 Grammy Awards, “Duets” was nominated for Best Traditional Pop Vocal Album and its sequel, “Duets II” would win in this category the following year.

Furthermore, I believe it foretold the coming of the “featured” artist. If you look at Top 40 albums today something that will stand out is how common it is for a prominent voice to lend itself to another’s recording in return for the “featured” designation on the song. I just glanced at the top ten songs on ITunes and six of them have featured artists. What a fantastic way to keep your name current between releases.

Frank Sinatra impacted the entertainment industry behind much more than a world-class voice: he utilized a tool every successful long-standing icon displayed – a blue-chip brain.