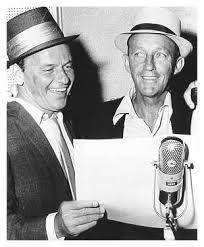 His Irish connection began with his parents.  Frank’s dad, Anthony Martin took on the professional name of Marty O’Brien to be taken more seriously with his boxing career and to be permitted to fight in the neighborhood’s Irish-only venues.  Ol’ Blue Eyes’ mother, Dolly, was extremely active in their Hoboken community and would, among other things, liase between the Italian and Irish political sects.  When they opened their tavern, it was named Marty O’Brien’s.

Sinatra was loved around the globe for his music, but he seemed particularly popular in Ireland.  I’ve written about the importance Frank played in the life of Irish writer Nuala O’Faolain and even found a blog from “a proud Irish girl with not a drop of Italian blood in me,” who wrote, “No singer defined my childhood more than Frank Sinatra.”  I think the strong, sometimes toxic, family relationships that can come from hardships resonated with the emotion Frank was able to express in his songs.

Little Frank grew up with Bing Crosby as an idol.  Crosby, whose mother was of Irish descent, made the most of that connection by recording many Irish tunes.  It’s interesting to me that although it was common for artists to cover many of the same songs, Sinatra seemed to leave the obviously Irish ballads to his crooning friend.  Perhaps he felt the lyrics could be interpreted as insincere.

Frank’s connection to his fans was powerful, lasting, and real and the one thing that becomes apparent when meeting the many who have loved his songs at my concerts is that it doesn’t matter where you’re from – that appreciation of The Voice’s abilities crosses all potential barriers, including ancestry.