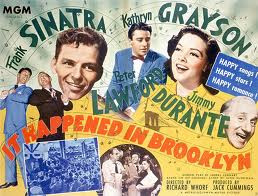 The song’s gotta come from the heart.  That’s the advice Jimmy Durante gave Frank Sinatra in the 1947 movie, It Happened in Brooklyn.  Of course, even though Frank was still pretty young, he had clearly figured out the need to connect with the music and lyrics of a song, but it never hurts to be reminded about an important truth.  Ol’ Blue Eyes and The Schnoz aren’t necessarily two names that you saw beside each other often, but they genuinely seemed to enjoy it when they did perform together.

It’s not surprising they made a great team as they had a number of similarities: both were born to Italian immigrants; both were multi-talented performers - Durante sang, played the piano, acted, and did comedy; both worked very hard to be able to rise to the top of their professions; and did you know Durante is mentioned as the first white bandleader to feature black musicians in his live band.

Besides being 22 years Frank’s senior, there are differences between Jimmy and The Voice too.   Durante was only married twice - his first wife died of heart trouble when she was 46 and he was married to his second wife until his death in 1980.  He was so devoted as a husband, he would close his radio show by saying, “Goodnight, Mrs. Calabash, wherever you are,” and nobody knew it was a tribute to his first wife until he revealed that tidbit in 1966.

Whether it’s their interaction in It Happened in Brooklyn, the chemistry onstage in television shows such as The Colgate Comedy Hour, or any other lucky meeting of these two brilliant performers, the appreciation for each other’s talents is unmistakably genuine and that adds to the performance, making us feel as though we’re in on a little secret.  But the secret is out: we would have loved to have seen more with the two of them.