Frank Reunites Dean and Jerry at the 1976 Telethon 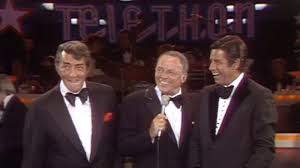 Saying you’re sorry can sometimes be one of the most difficult things to do, especially if you don’t think you did anything wrong.  That seems to be the basic premise behind the breakup of one of the biggest comedy duos of all time, Martin and Lewis. Apparently, Dean was upset he wasn’t having much control over their act and Jerry wasn’t about to let up on a good thing and the rest, as they say, is history.

And it’s a good thing they did break up, especially for Dean.  His stardom reached new heights after their split.  Still, the amazing thing about the accomplishments of Martin and Lewis is that it happened over a mere decade - becoming legends in ten years is an incredible feat.

The pair genuinely seemed to love and respect each other.  So, when Frank approached Dean one day with the idea of surprising Jerry on his telethon, where Sinatra would be singing on the set for the first time in 23 years, it’s said Martin replied, “What the f***?” Translation: “Let’s do it!”

The actual reunion is a little uncomfortable to watch, and they didn’t suddenly become best buds afterward, but that only showed how unscripted it was and happiness is apparent on both faces.

Without Frank, it may never have happened.  “He’s the only person who could have achieved something like that,” said Mark Rozzano, Jerry Lewis’s manager, adding that nobody else knew about the plan.

In 1989, I had the honor of not only meeting Jerry Lewis, but, in the show "Comedy Kings" at the Sands Hotel, I got to do my impression for him. I was more nervous doing Dean Martin and he replied to me, "You should have done more of me.”

In an interview with TCM's Ben Mankiewicz not too long ago, Lewis acknowledges that he still though of Martin has his best friend right up to Dean’s death, saying, “He was the nicest, warmest, most genuine, honorable, integral man I’ve ever known in my life.”  We lost Jerry Lewis this week at the age of 91; I’m sure there’s been another reunion and this time Frank didn’t have to lift a finger.