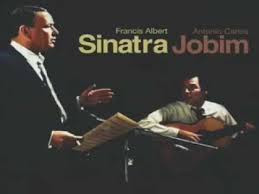 Good things are meant to be celebrated.  When Ol’ Blue Eyes’ 100th birthday rolled around, the world had a party; when 1976 came, America reveled over its 200th year; and it’s worth noting for when I tour Canada this year that that nation is celebrating its 150th anniversary.  It has also been 50 years since the iconic album, Francis Albert Sinatra & Antonio Carlos Jobim was released and on April 7, 2017 a special expanded version will be issued to mark this milestone collaboration.

Sinatra was the best at what he did and Jobim was the best in his up-and-coming genre, Bossa Nova.  This Brazilian music form was smooth, hip, and popular with 1960s college students and young musicians and the world was taking notice.  In fact, Jobim’s album, Getz/Gilberto was the first jazz record to win Album of the Year in 1965 at the Grammys.  Garota de Ipanema, or Girl from Ipanema, won Song of the Year and would become one of the most recorded tunes of all time.

Clearly Frank was one of those who took notice and in 1967 the pair got together for three nights to record, Francis Albert Sinatra & Antonio Carlos Jobim, much to the delight of the music world.  To say the album was a hit would be an understatement; it was nominated for Album of the Year in 1968.  Frank had won the Grammy for Album of the Year in 1966 and 1967, but would be denied the hat trick as Sgt. Pepper’s Lonely Hearts Club Band by The Beatles was chosen over The Voice and Jobim.

In addition to the original ten spectacular tracks, the re-release will have two bonuses - an unreleased studio recording of Girl from Ipanema plus an impressive medley from the television special, A Man and His Music + Ella + Jobim.  For collectors, it will be available in heavyweight 180-gram vinyl, a limited edition blue vinyl, as well as CD and digital.

I haven’t chosen which version I want yet, but with so many must-have Sinatra recordings available, it looks as though I’ll need a bigger house!