Entertainment history made at Dodge Theater in Phoenix, Arizona 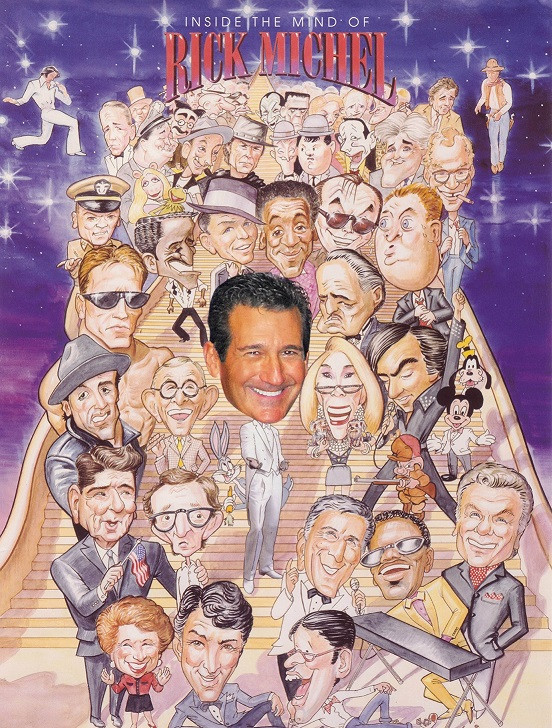 The Dodge Theater, Phoenix, Arizona was the setting for entertainment history last night as Rick Michel mesmerized the audience of 5000 people with his vocal impersonations of 101 actors, singers, comedians, politicians and other assorted celebrities.

"That's What Friends Are For" was the background for this stellar performance as Mr. Michel delivered this historical feat.

Setting a new standard for other impressionists to beat. Currently there is no record of a performer doing 101 voices in less than 4 1/2 minutes.

When asked how he was able to remember every individual voice, Michel stated, "It took about 6 weeks of grueling memorization to program the individual voices in consecutive order and be able to do the mannerisms as well."

To finish off his 8 minute spot, Rick continued with his rendition of Frank Sinatra, Sammy Davis Jr. and Dean Martin doing the classic Count Basie Orchestra - Quincy Jones arrangement of "Where or When", with hat in hand, horned rimmed glasses and cigarette at the ready, each character sang there individual parts.

Mr. Michel was just one of 13 celebrities who volunteered their time to be a part of the Michael Finney's 14th Anniversary "Dry Heat Classic" charity event held each first week of August, to raise money for many worth while organizations.

If you get a chance to see Rick Michel perform, I promise he will leave an impression on you.

For more information view his web site at www.RickMichel.com