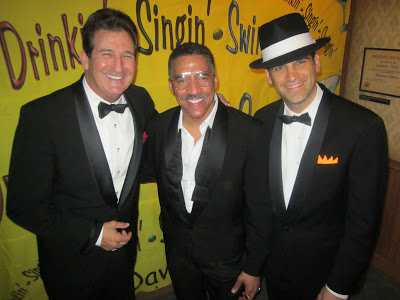 It's Christmastime all over the world, as the song says, and what better way to celebrate the holidays than partying with the Rat Pack? Now onstage through New Year's Eve at Welk Resorts, Escondido, Dino, Sammy and the Chairman of the Board once again bring their joyous revelry into our lives.

And what constitutes their revelry? Only a young, unfamiliar generation may query. For those of us that grew up with Dino Martin, we remember the loose, boozy party boy who loved to drink even during his TV show, though we know it wasn't allowed, so it must have been a gimmick, one to be sure that garnered plenty of laughs. Well Rick Michel who plays Martin here conveys that total carefree essence of Martin so well that from the very top, we know we're in for one helluva good time. There's even a bar onstage in front of the super 7-piece orchestra led by cracker jack Dan Ellis. Michel, Bryan Clark who plays Sammy Davis Jr. and Ryan Baker who dons Frank Sinatra's hat sit and smooze there when one or the other is singing centerstage. These boys are terrific entertainers, not only singing but doing impersonations as well. Clark does a mean Nat King Cole and Johnny Mathis singing "The Christmas Song" and later a boisterously sexy Tom Jones. Michel is just great as Jerry Lewis, Bob Hope, Bing Crosby, Rodney Dangerfield, John Wayne...and both Archie and Edith Bunker, either singing or cracking jokes. Clark really hits the mark with "Candy Man" and does a sensationally smooth rap dance as Michael Jackson. And Baker? Well, he's Frank, the Chairman of the Board, who doesn't have to prove himself at anything. He only needs to sing. And yes, this boy can definitely sing.

Song highlights include great holiday favorites like "Santa Claus Is Coming to Town", "Have Yourself a Merry Little Christmas", "Walkin' In a Winter Wonderland", "We Need a Little Christmas" and of course "White Christmas". There are also the regular nonholiday hits such as Sinatra's "Witchcraft", "All the Way", Martin's "Return To Me" and Davis' "Such a Lot of Living To Do" and "I've Gotta Be Me".

The show is a rousing walk down memory lane and a joyful, tuneful way to experience and savor some real pre-Christmas cheer. Michel, Clark and Baker put their own individual spins on Dino, Sam and Frank. They are so good at what they do, we come away appreciating and loving the Rat Pack all the more.
Go and have a blast! Check website for matinee performances, many of which may be accompanied by a delicious buffet.