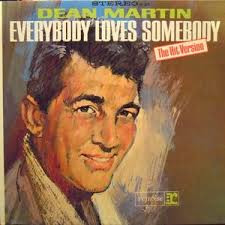 It was 71 years ago today that Dean Martin got “Songs by Dean Martin,” a 15 minute, New York based radio show on which Martin would sing four or five tunes. This was about a month before he even met Jerry Lewis and he had, thankfully, left the boxing ring behind to pursue a singing career – he didn’t do half bad. If fact, he had around 40 Billboard Hot 100 singles, with three of them reaching number one.

A signature song is one that sticks with an artist forever and when you hear the tune, no matter who’s performing it, you think of that certain singer; “That’s Amore” is such a song for Dean Martin. Everything about this song screams “Dino,” the title is half Italian and it’s about love. It was introduced in the Martin and Lewis comedy, The Caddy in 1953 and remains a pop icon today. Some sources claim it as only reaching number two in the US, but it attained number one in Australia nevertheless.

There’s no doubt about his next blockbuster. “Memories are made of This” essentially went straight to number one after its release in 1956, becoming his biggest hit. There’s seriousness and richness in the lyrics and vocals that only seem perfectly attainable by Martin’s abilities. Sinatra even recorded it in 1964, yet I prefer Dino’s original. Other notables achieving success with this ditty include Gale Storm, Mindy Carson, the Drifters, and Anne Murray.

There’s a whole lot of story telling buried within his final number one hit, “Everybody Loves Somebody.” It hit number one in 1964, yet the song, written in 1947, had been recorded by a number of artists previously, including Frank Sinatra, and failed to make a splash. Martin had even sung it on Bob Hope’s radio show in 1948, but didn’t become enthusiastic about it until he needed another song for his “Dream with Dean” album and his piano player, one of the original writers of the song, suggested this. The rest is history, as it would go on to knock The Beatle’s “A Hard Day’s Night” out of the number one spot.

“Everybody Loves Somebody” immediately became his new signature song, to be linked with him forever, with those words even being engraved on his grave marker. Let’s all toast Dino!