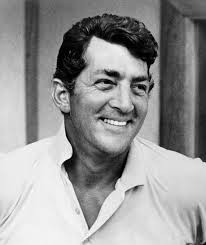 With the 100th birthday celebrations for Frank Sinatra so prominent, it’s easy to overlook Dean Martin (his 100th birthday will be in 2017), but I have such a respect for him and genuinely love being him on stage that I wanted to make him my subject this week.

One of the reasons, I believe, he doesn’t get the same attention as Ol’ Blue Eyes is because of his quiet nature. He didn’t seem to let very many people close to him – family and friends like Frank and Sammy, who were essentially family, seemed to be the limit, still he managed to endear himself to many. The public were ingeniously given the impression that he was the lovable alcoholic, never without a drink, even though that was for the act. He liked his Jack, but he knew his limits. The fact that really hits home for me is that it seems as though everyone loved and respected him.

Davis Jr.’s daughter, Tracey said, “Uncle Dean was the make-it-work gentle kind of soul. He seemed to soften everybody up like a Downy sheet in a dryer” when she spoke about the dynamic between her father, Frank, and Dino.

Frank’s daughter, Nancy, has said Martin was, “probably the funniest man I ever knew in my life. He was hysterical.” Nancy also referred to Martin as “Uncle Dean.”

When I listen to Martin’s music – he began his singing career basically imitating Bing Crosby, until finding his own voice – there’s a happy sincerity palpitating through the speakers, which is something I work very hard to capture. It didn’t surprise me when I read his daughter Deana saying, “you can actually hear the smile.”

It seems Dean was a very good dad, raising his children, of which there were many, right. His son, Ricci, said, “With Dad it didn't matter if you were the shoe-shine guy or a top studio executive, he treated you with respect, and that always stuck with me.”

Raise a glass for the “King of Cool” and I hope you’ll join me for a show some day soon.