DSS Christmas a must for Southern California 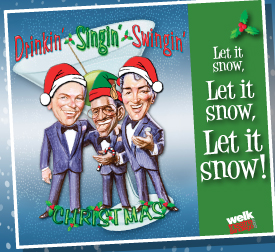 Now through New Year’s Eve, audiences can enjoy “Drinkin’-Singin’-Swingin’-Christmas Salute to Frank Sinatra, Sammy Davis Jr., and Dean Martin.” Ryan Baker (Sinatra), Bryan Clark (Davis), and Rick Michel (Martin) belt out classic holiday hits from the California stage. A huge seven-piece orchestra rounds out the scene and accompanies the musicians. Together, the three men offer upbeat versions of songs like “Winter Wonderland,” “Santa Claus Is Coming to Town,” and “Have Yourself A Merry Little Christmas,” as well as all-season melodies like Sinatra’s “Fly me to the Moon,”  Martin’s “Volare’”, and Davis’ “What kind of fool am I.”