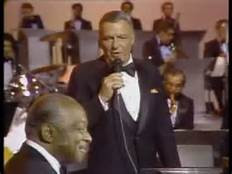 It was a match made in Heaven, and it just so happens that the first track on their debut collaboration, Sinatra-Basie: An Historic Musical First, was “Pennies from Heaven.”  That first album together happened in 1962 and their last studio album was in 1964, but these two legends paired up again in 1966 for Frank’s first live album, Sinatra at the Sands, although they would perform together more.

By the time Basie and Sinatra finally got together for that “historic” record, they were both recognized as the musical icons they worked hard to become, yet their careers were in a bit of a different place; The Voice was utilizing his influence to grow his Reprise Records label, while Basie was really working to keep big band music alive.

Count Basie, like Sinatra, was born in New Jersey.  With the encouragement of his mother, who procured piano lessons for him, he immersed himself into entertainment, eventually becoming one of jazz music’s all-time greats, shaping the big band sound into what we recognize today with his own orchestra.  He was the first African-American male to win a Grammy Award, which he earned in 1958.

Both artists really benefitted from their work together, in fact, after their albums, a 1966 article is quoted as saying that Frank has “never been this hot.”

And while the recordings stopped then, they frequently entertained on stage together.  They played the Newport Jazz Festival in 1965 and Sinatra was quoted as saying, “I have a funny feeling that those two nights could have been my finest hour, really. It went so well; it was so thrilling and exciting,” when he spoke about a charity benefit for the National Society for the Prevention of Cruelty to Children in 1970.

Basie passed away in 1984 from pancreatic cancer, just one year after his wife died of a heart attack.  We are all very lucky to still be able to listen to two greats working as a team at the top of their respective games.