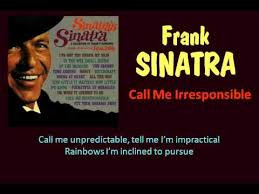 Frank Sinatra released his version of the Academy Award winning song, “Call Me Irresponsible” in April of 1963; it’s the best-known recording of the tune, charting on Billboard’s Hot 100 for eight weeks.  As is often the case with Ol’ Blue Eyes’ songs, “Call Me Irresponsible” wasn’t written for him; in fact there are two versions of why it came into being, both involving wonderfully iconic artists.  I love how so many of these golden standards have stories of their own, often threading through the lives of so many we hold dear.

Version one states that the song was written for Judy Garland, one of the women Frank loved, after she signed on to do The Judy Garland Show on CBS; the song was to touch upon her many publicized problems. She did sing the song in the seventh episode and it would be hard to argue that the lyrics don’t fit this thought.

Yet, there’s a problem.  The man that wrote those lyrics, Sammy Cahn said in an interview that he wrote them for Fred Astaire’s approval for the movie, Papa’s Delicate Condition.  Fred liked the song, but contractual conflicts didn’t allow the dancer to make the movie and the role went to Jackie Gleason.  You likely know that rumor has it that it was Gleason that turned Sinatra on to his favorite drink, Jack Daniel’s whiskey, so that’s a pretty swell connection.

Jackie, truly larger than life, was a fine actor indeed and his introduction of the song in the film was marvelous.  He seamlessly slips through a wide range of emotions, commanding the attention of the watcher and drawing them into the everything the character is experiencing.  It’s beautiful to watch a talented actor do this.  And his talents obviously didn’t go unnoticed with the Best Original Song Academy Award victory.

I think I’ll grab a glass of Jack and have a listen to both Frank’s and Jackie’s version of this heart-touching song with a storied past.