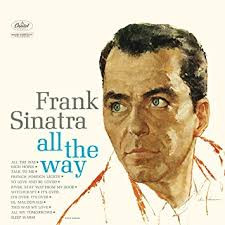 The Academy Awards take place on March 4th, 2018 and there are some pretty powerful tunes vying for the coveted trophy for the Best Original Song; 60 years ago, it was a Frank Sinatra song that took the top prize, the middle of three times he won for this category out of seven nominations.  There are some similarities today compared to six decades ago, and some differences too.

“All the Way” was written for the 1957 movie, The Joker is Wild which starred Ol’ Blue Eyes in the role of Joe E. Lewis, a major nightclub performer since the 1920s.  The movie did well both critically and financially, and the song became a sensation, reaching number two in airplay on the Billboard chart.  When the movie was rereleased years later, the title of it was changed to All the Way because the song was so popular.

This year’s nominated songs feature big voices like Andra Day and a production from an animated film, which seem to have replaced the musicals of 60 years ago.  One of the nominations that caught me by surprise came from the movie, Call Me by Your Name, which is set in Italy; the song, “Mystery of Love” by American singer Sufjan Stevens contains nuances in its theme that remind me of something The Voice would have chosen - it’s a gentle love song with a melancholic undertone.  The direct comparisons pretty much end there as Stevens sings with a breathy style that is nothing like the big, controlled instrument Frank could exhibit.

60 years ago, the other nominated songs included present day staples such as “An Affair to Remember” and “Wild is the Wind.”  Regardless of who wins the Oscar in March, will any of this year’s songs be remembered in 2078?  I have to hope musicians are still delivering, and being recognized for, timeless arrangements.