Another Lost Legend in Leonard Cohen 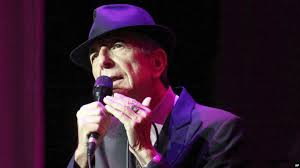 2016 continues to claim many of the legends we love with the death of Leonard Cohen just over a week ago.  The Montreal-born Canadian singer/songwriter was smart, poetic, and seemingly tireless, but now all we can do is reflect on what he left us as he best known for the song “Hallelujah”..  There are even similarities with the biggest American entertainment legend of them all, Frank Sinatra.

To start with, they were both 82 when they passed.  Frank, born in 1915, was 19 years Cohen’s senior - basically one full generation - and there was no doubt they were aware of each other.  Once, when reflecting upon why he does what he does, Cohen said, “I really don’t know why I’m here. It’s a matter of “What else would I be doing?” Do I want to be Frank Sinatra, who’s great, and do I want to have great retrospectives of my work? I’m not really interested in being the oldest folksinger around.”

In 1987 Jennifer Warnes, who was a back-up singer for Cohen in the ‘70s, did a whole album covering his songs called, Famous Blue Raincoat.  Interestingly, Cohen said there was once talk of a similar project, “Frank Sinatra talked about doing something like that … but it never happened.”  That would have been fantastic; Ol’ Blue Eyes’ voice combined with the deep, poetic lyrics of Cohen - what a loss.

There is one song they both did a great cover of - Irving Berlin’s “Always”.  Sinatra’s version is simply a perfectly pure, longing tune dripping with emotion, it’s beautiful.  Cohen did something entirely different, making it nearly three times as long, as Frank’s and sexing it up with a deeper, more staccato sultry voice.  The two covers couldn’t be less alike, but they both work.

Anyway, the point is that there seems to be far too many big-time stars leaving us to visit Frank during his 100th birthday year.  Maybe when December 12th comes around and he turns 101, the losses will stop.  We can only hope.