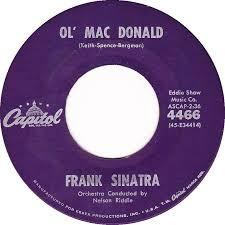 Many have written about Frank Sinatra’s love songs, myself included of course, debating which was the most romantic.  So many are great for setting the mood on a date or with that special someone on Valentine’s Day, but you’re talking about a whole other beast when you ask, “What is the sexiest Sinatra song?”  One highly possible answer may surprise you.

If you watch reality shows like The Voice or American Idol, you often hear the cliché, “They could sing the phonebook and make it sound good,” and the sexy Sinatra tune I’m talking about isn’t far off that mark.  I’m certain you’re familiar with the nursery rhyme Old MacDonald Had a Farm, but have you heard Ol’ Blue Eyes sing it?  If you haven’t, play it now.

Ol’ MacDonald was a 1960 recording, apparently meant for the album Sinatra’s Swingin’ Session!!! but it didn’t make it on the album.  The song is included on the CD reissue though and it makes you wonder why in the world they would have held it back.  Swingin’ it is!  Frank takes this children’s classic and makes it PG13 at least.

The lyrics talk about “the purist chick I know” on Ol’ MacDonald’s farm, going into details about this chick’s curves and wiggles, ending with a classic farmer’s daughter stock character reference with Frank doing the right thing, asking the farmer for the chick’s hand in marriage.  The song is a blast!

Ol’ MacDonald illustrates exactly why Frank is missed today; he really could take anything and turn it into something magical with that golden voice, and sexy-cool persona.  No one has compared since or likely ever will.