A Sinatra Song With Meaning 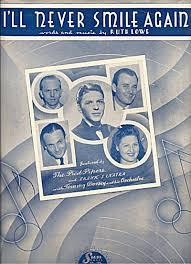 ”I’ll Never Smile Again” wasn’t merely Ol’ Blue Eyes’ first number one song, it was the first Billboard number one song ever.  The Billboard Music Popularity Chart made its debut in newspapers across America in July of 1940 and right at the top was the Tommy Dorsey/Frank Sinatra recording.  The tune held the top spot for twelve weeks.

Horace Walpole once said, “This world is a comedy to those that think, a tragedy to those that feel,” and the song’s writer, Ruth Lowe, must have included herself among the latter group when this song was born out of the despair that followed her husband’s unexpected death.  The somber lyrics are heartfelt and invoke the sorrow that she must have been experiencing and the fact that Frank came along and was able to channel those emotions in his voice meant a version that would remain timeless in addition to setting the table for The Voice to show off his abilities.

With Frank on the vocals, “I’ll Never Smile Again” became a song anyone suffering heartache could relate to, which was especially important with World War II raging.  It would be inducted into the Grammy Hall of Fame and Lowe, who went on to write many other hit songs including “Put Your Dreams Away”, which was a staple for Sinatra, would be inducted into the American Music Hall of Fame and receive an honorary Grammy when Frank spearheaded the nomination.

And here’s a little-known piece of trivia that even Wikipedia has incorrect: Sinatra and Dorsey were not the first to record the song; Canadians were well acquainted with it thanks to a 1939 version by Percy Faith.

So, some dreary, rainy day, turn on the record player, pour yourself a tea or Jack on the rocks and let the mournful strains of “I’ll Never Smile Again” send you back to a special time. https://www.youtube.com/watch?v=il7DWoLySW8