“What’s Wrong With Hollywood” according to Frank in 1963 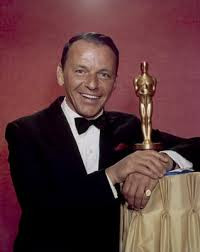 Frank Sinatra hosted the Academy Awards in 1963, something he seemed very comfortable doing, respectfully honoring all the chosen nominees, cracking a few jokes, and even delivering a short-but-sweet speech on the troubles with Hollywood.  His soliloquy is poignant in that you could probably jump ahead fifty-plus years and it would still be relevant.

He starts off, just before the big award of Best Picture of the Year, by seriously stating that he’s tired of all the editorials telling people, “What’s wrong with Hollywood,” letting those in the audience know that “What we need are good pictures.”  He expanded his thoughts by intimating that the practice of making movies needs to be done by individuals instead of big-business.

Ol’ Blue Eyes thought that pictures should be “hand made with love, passion, and care by individual picture makers,” rather than business executives.  It was tough to judge the reception from the other stars present; there was a smattering of applause in the middle of the talk, but with his transition into the presenting of the award, there wasn’t time for reaction.

Do you think Hollywood took that advice?  Judging by movies today, they’ve only expanded upon their committee approach to film making.  It seems that instead of creating a movie with the passion of the writer, director, and actors, they poll focus groups to determine what will be received best.

I know stations like Turner Classic Movies seems to be gaining in popularity because I think many others are missing those, well, classics that were borne out the desire to sculpt a story that was true to the vision of its creators.

Frank was onto something in 1963, but his message seems to have fallen on deaf ears.

Oh yeah, just so I don’t leave you in too much suspense, it was Lawrence of Arabia that won for Best Picture!