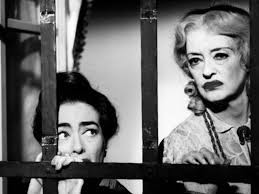 Frank Sinatra did an excellent job hosting the 1963 Academy Awards, including his short speech on “What’s Wrong with Hollywood,” which I wrote about last week, but the biggest story that night became a chapter in one of the most famous Tinsel town feuds of all time and it involved Joan Crawford and Bette Davis.

To say that these two iconic actresses weren’t fond of each other is a bit of an understatement; they were rivals that seemed to take an unnatural pleasure in seeing their counterpart’s suffering.  America may have thought that this had been resolved when they came together to star in the 1962 nail-biter movie, What Ever Happened to Baby Jane? but that illusion soon vanished when Davis was nominated for an Academy Award and Crawford was snubbed.

So, when it came time announce the Best Actress winner, everyone, especially Davis, was surprised that it was Crawford that walked off the stage with the prized trophy.  How did that happen?  Joan secretly contacted the other nominees offering to accept the award on their behave if they weren’t able to attend and Anne Bancroft, the eventual Oscar winner, took her up on her generosity.

Not only was Bette upset she didn’t win, she had to deal with her rival upstaging her.  Davis thought Joan went even further though, accusing her of campaigning against her potential victory.  Crawford denied ever doing this, but you do have to wonder.

And there, presumably in the wings, was Frank playing a part in another huge pop-culture moment in American history.  If you find this interesting, you can even watch the television show Feud: Bette and Joan, a successful FX channel program that premiered this year featuring Susan Sarandon and Jessica Lange in the starring roles.  Don’t you just love old Hollywood?